Vacation in Srima, Vodice – active holidays in and around Srima

Srima is a densely populated coastal apartment settlement, which is directly connected with Vodice. It is located southern from Vodice and represents the closest shelter from the city life. The distance between Apartments Lušić and the centre of Vodice is approximately 2 kilometers.

The neighborhood of Apartments Lušić offers you numerous of bars, restaurants, confectioner’s shops, stores etc. Sold products are not too expensive, which is ideal to enjoy your vacation and save some money.

We recommend families with younger children to visit us end June till the beginning of July, because the nearby Šibenik organizes the yearly International Children’s Festival, where you can enjoy in Children’s Theatre Plays. http://www.mdf-si.org/eng/index.asp

The bigger Dalmatic cities organize in the second half of August evenings with live music (Klapska večer). Go for a relaxing walk to the centre of Vodice

You can exploit the park by bout or take a longer walk, however, do not forget your bathing suit and towel, because you will miss an unforgettable experience in the pools of the river Krka. 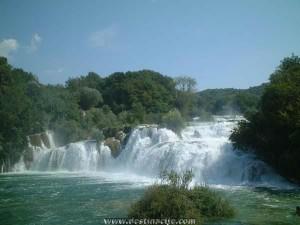 You are also welcome to explore the Mediterranean group of Islets named Kornati, which are under the protection of UNESCO, because of their ecological structure and agitated surface. There are 150 islets and crests on a region of 320 km2 and the various bays provide natural shelters before the rough sea and an excellent opportunity to relax in the view of the clear blue sea and the stony white landscape. Maybe you catch the sight of the rare stone marten, which represents one of the rare wild animals of this region.

The neighborhood of Srima provides many interesting buildings, settlements, archaeological remains/sites and even a various number of sports activities like diving, water skiing or cycling.

The region has a Mediterranean climate with warm and dry summers and wet and gentle winters. The average temperature in Srima reaches 26 to 30 °C in summer and 5 to 10 °C in winter. The coasts of Dalmatia belong to one of the most sunny areas in the Mediterranean.

The area of Srima was already populated in the classical antiquity. The Turkish invasions forced the population to move around a kilometer away to the island Prvić, where they stayed until the end of the 17th century. Then they started to return to the mainland and populated the whole coast of Srima. Srima represents today a calm apartment settlement, which is suitable for the young, families and the old.